Recent FAO studies show that agriculture and livestock farming are still at the heart of the economy in many developing countries. Updated statistics also indicate that per capita meat consumption has more than doubled in recent decades, which in turn has imposed an increasing need for resources and a high waste management capacity. Hence the importance of clarifying and addressing the issue of the disposal of dead farm animals and slaughterhouse waste by highlighting the consequences of improper management of such waste.

Burial has consequences at hydrogeological level, causing environmental damage by polluting water tables and wells for human use, and to public health by transmitting diseases; abandonment in the open air would cause pollution as the air would be contaminated by the putrefaction process of abandoned carcasses. If we examine livestock manure and animal dung, we see that due to the high presence of nitrates and other substances polluting the water table, they are considered special waste and therefore cannot be spread directly on the ground. During the process of decomposition, caused by the separation of tissues from the body’s internal chemicals and enzymes and by putrefaction, which is carried out by bacteria, large quantities of gases are released, whose chemical composition includes percentages of methane, magnesium and potassium, which in contact with the air could also trigger fatal combustions or ‘fatuous fires’.

At the beginning of this stage, known as the emphysematous stage, which generally begins 3-6 days after death, larvae of flies, insects and boneworms already develop (if the carcasses are buried at insufficient depth, adult insects and small rodents may contribute to the skeletonisation process as well as to the spread of diseases and viruses). Then the anaerobic germs begin to spread, gas production ceases, organs such as the liver and kidneys fluidise into a shapeless, flowing, foul-smelling mass that seeps into the internal cavities. In this phase, generally referred to as the colliquative stage, cadaveric leachate spreads and can host pathogens, lasting from a few weeks to several months and making disposal hazardous. The whole process, which ends with the skeletonisation and mineralisation of the carcass, takes approximately 1 to 5 years, depending on the size of the carcass, weather conditions and other variables. The above timescales and data make it clear that there is a need to investigate faster, more effective and environmentally sustainable solutions for carcass disposal.

Incineration, in fact, solves this issue in a much shorter timeframe, in a safe and effective manner that respects the environment and public health. The process of incinerating a carcass is completed in approximately 50 to 60 minutes.

Abandoned carcasses can also become food for stray dogs and other pests that are potential vehicles for zoonoses, since there is no guarantee of the healthiness of the dead animal left in the field, which thus become a reservoir of viruses and infectious diseases that spread contagion.

In this regard, and in these times of pandemic caused by the COVID-19 virus, it is relevant to highlight the case of Denmark, which was forced to raise the alarm because a mutated strain of the virus appeared on mink farms and infected more than 200 people. Many mink farmers have been forced to slaughter thousands of animals, approx. 17 million, and dispose of them safely by incineration.

The European Union Regulation identifies the remains of animals that have died on farms due to infectious diseases as dangerous, and requires a quick, cheap and environmentally friendly solution for the regular disposal of farm waste and carcasses of animals suffering from diseases (swine fever, bird flu, bovine spongiform encephalopathy, salmonella, etc.). In the Netherlands, some 215.000 birds carrying bird flu had to be slaughtered recently, and in Italy, in the provinces of Ferrara and Bologna, more than 1 million hens and turkeys had to be slaughtered to stop the contagion. Similarly, numerous new cases of African swine fever (ASF) have recently been reported in Germany. Over the last decade, the disease has affected countries such as Georgia, Armenia, Italy and China, with around 150 million pigs infected in China only.

In the light of this considerations, it follows that the incineration process is regarded as the most suitable and valid solution for the following reasons:

For more than 40 years For.Tec. has been designing and building technologically advanced incineration plants that comply with the most stringent environmental regulations. Our production line represents the perfect solution to the problem linked to the disposal of organic waste and animal carcasses; specifically, For.Tec. produces: 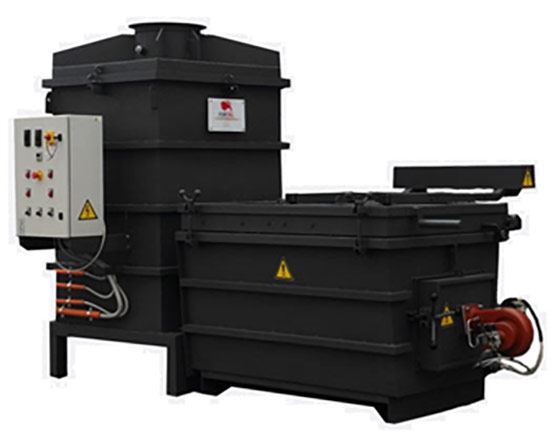 EXCE AN incinerators are reliable, durable, easy to use and install, 100% made in Italy, with an incineration capacity ranging from 30 to 500 kg/h.

One of their main features is the top-loading system, which allows the material to be inserted easily even in the presence of very large carcasses. The EXCE AN range of incinerators can also be built in a “mobile” version, on skid or containerised, to offer a rapid and effective response to all emergency and epidemic situations, reaching even remote areas with ease.

Request info through our channels